Tesla will build its first Europe based factory in Berlin. Here’s 5 things you need to know

BERLIN – This was the week where entrepreneur Elon Musk came to Berlin and said that Tesla would build its first Europe based mega factory in the suburbs of Berlin. A ‘Gigafabrik’, as the Germans say. Here’s 5 things you need to know about the big Tesla announcement. 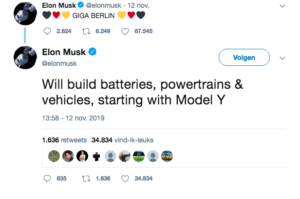 Home
What we do
Our Partners
About us
Contact